Forget The Dips, Sell The Rips

Now that was fast!

When I posted a piece a week ago noting that the S&P 500 had crossed the 2100 line from below for the 13th time this year, it signified that the market had been thrashing sideways since February 13th. Perhaps that was an omen, but technically speaking it was just further proof that the stock market is driven by Fed-following day traders and algos that reflexively buy the dips.

But on Thursday and Friday last week, the casino gamblers got a rude awakening. Not only did they lose their lunch in a violent plunge during the last half-hour of trading two days in a row, but they also gave back another seven months of gains, as well as the crucial chart points that have kept the robo-machines aggressively buying the dips for the past six years.

As shown below, the S&P 500 has now retreated to the level it first crossed nearly 14 months ago on July 1, 2014; and it has also sliced through both the 50-day and 200-day moving averages like a hot knife through butter.

Worse still, in Monday’s pre-market futures the SPX is down another 45 points. If that holds, the market will be down 10% from its May 21 peak and off nearly 8% from its 200-DMA. The latter is double the short-lived 4% swoon back on October 15. 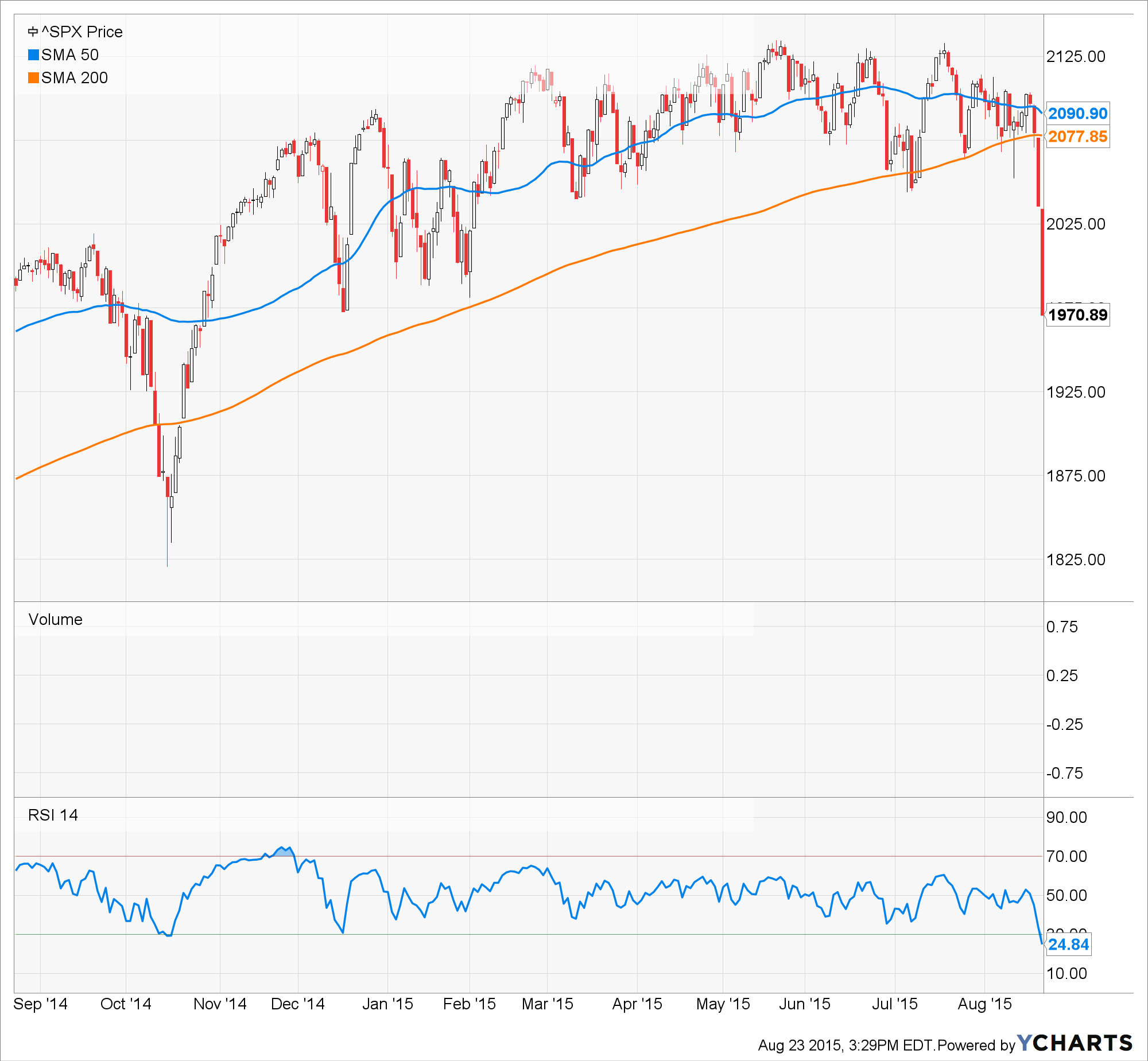 That all adds up to some kind of carnage, but don’t think the dip buyers are all done. As Doug Short demonstrated in his weekend chart updates, last Friday’s plunge brought the SPX down from its May peak by exactly the 7.4% drop which occurred last October.

That sell-off, however, was instantly reversed when one of the Fed’s most consistently inconsistent empty suits, Governor James Bullard, averred that perhaps it was time to consider an extension of QE within days of its actual ending. Upon that signal, the machines raged violently, taking the index up to 2050 or nearly 7% during the next 30 trading days. 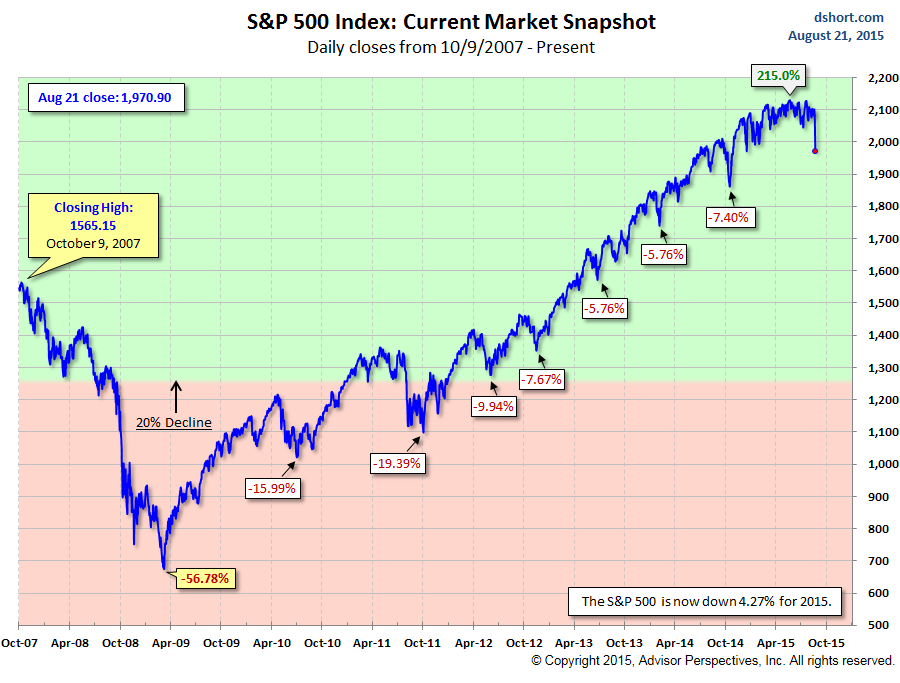 So expect some bullardization from the Eccles Building any day now—-perhaps when Ben Bernanke’s PhD advisor, and now Vice-Chairman of the Fed, Stanley Fischer, explains to a shell-shocked audience at Jackson Hole that we’re not there yet!

That’s right. This ridiculous academic pettifogger and cowardly monetary apparatchik will likely tell the oh so serious financial crème de crème gathered there that we are well short of the Fed’s magic 2% on the PCE deflator, and, therefore, the time may possibly not be quite ripe—not just yet—– for “lift-off”.

That notion is unspeakably duplicitous, destructive and self-serving. The Fed will likely defer the September rate increase not because there is too little inflation, but because it is scared silly about the kind of stock market hissy fit that is going on at this very moment. In truth, every bus driver and retired postman in America knows that main street has been “blessed” with a surfeit inflation for as long as any ordinary citizen can remember.

Just in the 15 years of this century, the price level has risen by 39% or about 2% per year if you credit the BLS’ deliberately tranquilized CPI, and by 2.5% annually if you use an honest measure of cumulative housing and rent inflation.

That the measured inflation rate in the last few months is running below that well-established trend level due to the self-evident collapse of oil and other commodities is completely irrelevant. Zero interest rates can do exactly nothing about a ferocious global deflation that was actually caused by the massive malinvestment generated by years of zero interest rates and central bank financial repression.

So the Fed is keeping its foot planted squarely on the neck of savers and retirees for the contemptible purpose of keeping the Wall Street gamblers in free carry trade money, thereby hoping to trigger another stock market up-leg in its misbegotten campaign to generate economic growth by showering the 1% with fantastic “wealth effect” windfalls.

Yet notwithstanding its sheer humbuggery, any such Fed confected headline is likely to catalyze another face-ripping frenzy of dip buying, accompanied by a chorus of Wall Street pitchmen announcing that the market has bounced off “support”, and the bull is ready for another upward sprint.

Do not buy this dip, even the crater now forming. It does not represent “value”; it embodies a nasty trap owing to the unfolding collapse of the worldwide central bank driven financial bubble that has been expanding for more than two decades.

Too be sure, we have been at this juncture before——exactly seven times since the March 2009 bottom. At the time, one of Wall Street’s most astute and sober minded traders, Doug Kass, called 666 on the S&P 500 a “generational bottom”.

Needless to say, that was a prescient call. Being long has never before in recorded history generated so much paper wealth so consistently and in such a relatively brief period of time. To wit, the Wilshire 5000 basket of US stocks alone gained more than $15 trillion of market cap during the next six years; and the total value of all corporate equity in the US economy, as tabulated by the Fed’s flow-of-funds report, soared by more than $20 trillion, thereby substantially outpacing the two earlier stock market bubbles. 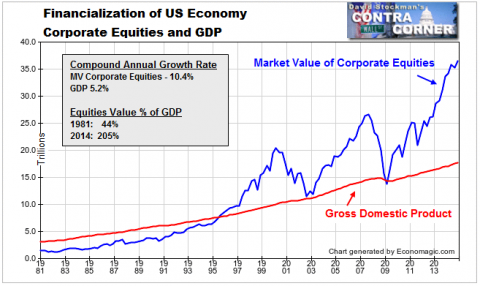 Here’s the skunk in the woodpile, however. Those gigantic gains had virtually nothing to do with the long-term trends in the US economy, which have been punk, at best. Instead, the soaring stock averages and booming trading accounts since the March 2009 bottom were fueled by a monumental monetary reflation.

The Fed and other major central banks of the world essentially have sought to “delete” from the casino narrative any and all real world factors that brought the domestic and world economies to their knees in the fall of 2008. But what they have accomplished instead is a monumental falsification of prices in virtually every asset class that is traded or not traded. So doing, they have divorced the financial market from the real economy nearly everywhere on the planet.

That is the true meaning of the above chart.  In fact, when total credit market debt outstanding is added to market equity the true extent of  unsustainable financialization becomes readily apparent. Whereas finance outstanding amounted to $8 trillion and about 200% of GDP before 1980, it has subsequently just ripped away from its moorings in the real economy.

During the last 35 years the value of US finance grew by 13X to $93 trillion. At the end of 2014, it represented nearly 540% of GDP. But in the great scheme of history, there is no reason why the US national income should be capitalized at any higher multiple today than it was in 1980—–given the sharp deceleration of economic growth, the baby boom retirement bomb and the debt-saturation of the public and private sectors alike.

Even had total finance stabilized at the 240% of GDP level which was in place when Greenspan took the helm at the Fed, the blue line in the chart below would end at $43 trillion in 2014.

So call the difference $50 trillion of excess financialization. Call it an eventual financial implosion that will bury all the robo-machines and all the gamblers tempted to buy the dip for the eighth time running. 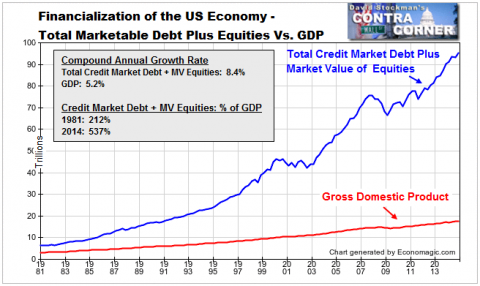 So what is different this time? The answer is that the post-2009 recovery was a false start. It represented a final and radical expansion of the growth and capital spending bubble that has been underway around the world since the early 1990s.

In effect, rather than allowing the earlier artificial booms driven by massive household credit expansion in the US and Europe to be liquidated, developed market central bankers drove interest rates to the zero bound in a foolish quest to jump-start consumption spending by debt-saturated households.

But this did not cause consumers to spend more in the US or Europe because the vast middle classes of these developed market economies were already at “peak debt”. Instead, it generated a madcap scramble for yield among money managers and an eventual capital outflow of $4-5 trillion into emerging market debt markets.

Taken together, the combination of unprecedented financial repression in developed market capital markets and the prodigious expansion of domestic business credit in China and the emerging market elicited a tidal wave of capital investment unlike the world has ever witnessed. According to the computations of Thompson Reuters Datastream for all publicly listed companies on a worldwide basis,  global CapEx grew from about $500 billion per year in 1995 to $2.5 trillion annually at the peak in 2013.

Since then, however, the massive capital spending bubble driven by central bank policy has begun to roll-over—–even as the lagged effect of the project completion cycle has temporarily braked the fall. Accordingly, excess capacity continues to build, meaning that the cliff-diving phase of commodity and industrial prices and profit margins has just begun, and that worldwide capital spending will be plunging sharply southward for years to come.

So now comes the era of gluts, shrinking profits and a drastic deflation of the giant financial bubble that the world’s central banks have so foolishly generated. And this time they will be powerless to stop the carnage.

(to be completed shortly)
Posted by Unknown at 4:49 AM

You could travel on hyperloop by 2018

The Economy and the Markets