The market action Wednesday was as unwelcome as a new snow storm in Washington DC. Given that the DJIA closed up 150 points for the day on Tuesday and the market breathed a sigh of relief, yesterday's closing down 20 points, on lousy volume, suggests that the bear market is firmly intact.

The current usual suspects weighting on US markets include sovereign default by Greece and others; China dumping non-government-backed US assets on the market as Sino-US tensions rise; a growing chance of a double-dip recession, the Obama Administration scattershot spending and higher taxes; an uncertain global economy; and the coming crash of local and state governments. Which, and how many, of these potential events might occur causing a retesting of last March lows? More importantly, does anyone have any plan to respond if the worst comes to fruition?

Last week I was invited to deliver the keynote address at the Institute for Supply Management Executive Summits in San Diego, CA. Several people were surprised by my dour economic outlook. All I did was present the data set that are buried below daily business headlines; news which is seldom seen and rarely discussed.

Frequently, in conversation, I reminded people that both Republicans and Democrats are behaving foolishly - like immature teenagers. My proof, I submitted, was the greatest generation. In 1941, the top marginal tax rate was hiked from 81% to 88% to pay for the war effort. From 1944 until 1950, the top tax rate varied between 82 and 94%, staying throughout the 1950s at 91%.

In that period America expanded the middle-class. We also developed a world-class interstate highway system, funded the G.I. Bill of Rights, educated the next generation, built an affordable, post-secondary educational system, and maintained a thriving employment environment. Country came first; profits automatically followed. We must do more than selectively cut spending.

That generation imposed upon themselves sufficient taxes to pay off debt and grow the type of healthy society it envisioned for the nation. Perhaps living through a depression for a decade crystallized in their minds their dreams and aspirations. Subsequently, tax receipts from productive citizens and an expanding economy repaid the investment. Somewhere along the way, we stopped looking at our nation as an asset to fund and nourish, but rather its many parts as a liability to truncate.

Below is a chart of our top marginal tax in the 20th century. 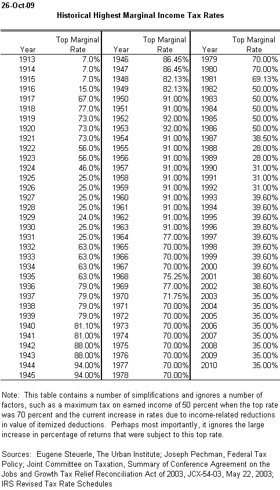 Remember, this is the same generation that constructed Glass-Steagall to prevent another 1929 stock market crash. This generation passed laws preventing war-profiteering and pursued criminal convictions against lawbreakers. The CEOs of this generation drew salaries that were greater than other employees in the organization, but not by triple-digit factors. Succinctly, these men led by example, placing country before political party and civic duty above selfishness. And during this time frame, they enjoyed a secular bull market and became wealthy.

Without men and women like these, people with courage, poor choices, normal Washington DC gridlock, denial of our predicament and more, a painful downturn in the economy could develop into a calamity, as great, if not greater than, the Great Depression of the 1930s.

So, where are the serious men in our nation’s capitol?

Below is a chart of the DJIA from 1940 to 1960. Even with huge tax burdens, investors wealth increased five-fold over 20 years. By contrast, we have just exited a lost decade, receiving no long-lasting benefit from a top tax rate of 35%, and we may be entering another difficult decade. 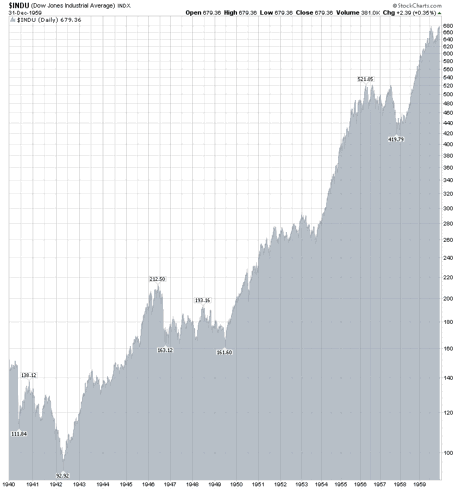 It was reported two days ago that China passed Germany as the world’s largest exporter. They also recently became the world’s largest manufacturer and buyer of automobiles. We will not export our way out of this economic situation. But the bear market will continue.

I do not see any corrective action being considered, certainly not undertaken, to confront the many problems appearing on the horizon. Fix the problem, and then change policy. Why is this concept so difficult to grasp? Unless the market has confidence in the leadership in this country, the lost decade will continue and intensify to the detriment of our financial system and our assets, the repository of our national wealth.

You could travel on hyperloop by 2018

The Economy and the Markets